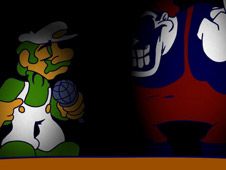 Step into the shoes of Mario 85, otherwise known as Mario.Exe, and have a tremendous rap battle against your brother, Luigi, in the newest FNF mod of our website, on the song called 'Fighting Back'.

Mario 85 is, the FNF Mario.Exe mod you were waiting for!

To win you need to reach the song's end, and to do that you need to keep playing your notes according to the charts. So, when you see arrow symbols float and match above Mario, press the same arrow keys at the identical time. Don't miss hitting the keys too many times in a row, or you have to start from scratch. Good luck, enjoy!