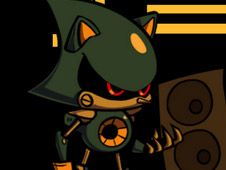 What is FNF: vs Metal Sonic?

New versions of Sonic the Hedgehog are always fun to battle in our category of FNF Games online, as it seems he has become a central figure of this world, and one of its most popular characters, so of course we would not have missed the chance right now to share with you all the mod known as FNF vs Metal Sonic, where you go up against a cyborg Sonic on three awesome custom songs:

It's your choice if you battle this character in the story mode or free play mode, but no matter the case, give it your best to reach the end of the songs by playing all of their notes according to the charts, for which you use the arrow keys.

How? Well, you see arrow symbols float and then match above BF's head, and at the same time they do, you have to press the same arrow keys, something you should keep doing until the end of the song.

This is because if you miss pressing the keys too many times in a row, you are going to lose the rhythm, the beat, and have to start the song from scratch. Good luck towards winning, and tons of fun we wish you all!