FNF vs BlackJack: The Stakes Are High 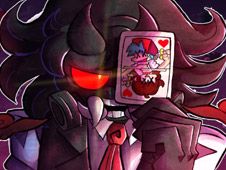 What is FNF vs BlackJack: The Stakes Are High?

BlackJack is not just a good rapper, but also an avid gambler, one that BF and GF met while they were on a trip to Vegas, so now that the two music rivals met one another, they have to battle it out, with us hoping that you will help our protagonist in winning the musical battle against him, on all the following custom songs:

Defeat BlackJack not through luck, but with musical skills!

Whether you are playing against this character in the story mode or the free play mode, your goal remains the same, and it is to reach the end of the songs by playing all their notes correctly, so when you see arrow symbols above BF match one another, at the same time you will have to press those same arrow keys.

Be careful not to miss pressing the keys too many times in a row, since that will lead to you losing the game and having to start it all over again from scratch. Good luck, have fun!