FNF: The Corruption Inside Us 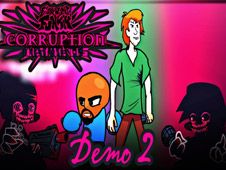 What is FNF: The Corruption Inside Us?

FNF: The Corruption Inside Us is one of the most expansive FNF Corrupted mods we've had so far, where the main battle takes place between Evil BF, who you control, against Shaggy, and this battle is going to purge the protagonist of his inner demons, with you having to win on all the following songs for that to happen:

BF Vs Shaggy, the FNF battle of corruption!

After making a choice between the story mode and free play mode, in either case, give your best to reach the end of the songs by hitting your notes according to the charts, since that is how you achieve victory.

So, when you see arrow symbols float and match above BF's head, you press the arrow keys at the same time. Miss pressing them too many times in a row and you lose. Good luck and all the best we wish you all!