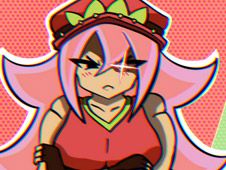 The endless fun provided by our category of Friday Night Funkin' Games online is not about to stop any time soon, which is why we are delighted that right at this moment we get to share with everyone the game called  FNF: Fruit Medley Mayhem Mod, where Fruit Medley is a duo of pop stars who want to impress GF's mom, which is why they have challenged BF, who has already defeated her, and whom she hates.

Win against these two in the following custom songs:

Help Boyfriend defeat two pop stars, all at once!

Of course, you can face off against these two new characters in either the story mode or free play mode, it's up to you, and your goal remains the same, which is to reach the end of the songs and have the progress bar be turned in your favor, simple as that.

Use the arrow keys to sing the notes of the songs at the right moments, so when you see arrow symbols match above BF's head, you have to press the same arrow keys on your keyboard to match the chart, which also means that if you miss doing that too many times, you lose the whole game and have to start again. Have fun, and funk out!