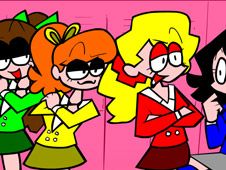 What is FNF Heathers Mod?

FNF Heathers Mod is a game where you take on the role of Veronica, who will have a rhythm battle against no less than three Heaters, all of them mean girls from her high school, who you now need to defeat on one awesome song!

When the floating arrow symbols match above Veronica, on the right, press the identical arrow keys to hit your notes, doing it until the song ends to win, while being careful not to miss your notes too many times in a row, because that will instead lead to your loss, forcing you to start all over again from scratch.