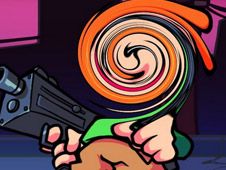 What is FNF but Funni: Week 3?

If you don't feel like taking FNF Games seriously right at this moment, then there should be nothing better for you to do than play the game called FNF but Funni: Week 3, which takes the original Week 3 of FNF, featuring Pico and his three custom songs, and throws in lots of gags, memes, and funny stuff, events that can happen at random and will make you laugh!

Defeat FNF's Pico once more, but this time also get a big proper laugh!

In this game, you get to pick to face Pico in either the story mode or free play mode, and in both of them, you give your best to reach the end of the songs and play their notes so well that the progress bar turns in your favor, giving you the win! The songs are:

The rules and mechanics are really simple! When arrow symbols above BF match with one another, you match them also by pressing the same arrow key at the same time. Be careful not to miss hitting those notes too many times in a row, since you will then lose the game and have to start it again. Good luck, enjoy!