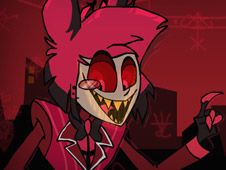 What is Vs. Alastor – Hazbin Hotel FNF Mod?

Alastor is a creepy character coming from the world of Hazbin Hotel, an animated show, and you and BF have to face him and defeat him on only one song called 'Insane'!

Win the FNF vs Alastor from Hazbin Hotel right now!

When you see floating arrow symbols match above BF's head, that is when you need to press the identical arrow keys to hit your notes, doing it until the song ends to win, without missing to hit your notes too many times in a row, since that leads to you losing. Good luck, enjoy!